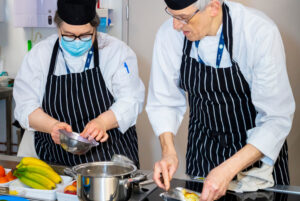 It was all thanks to Adrian Marks, School Chef, that pupils followed the thrills and spills of the footie around the lunch table.

When Spain played, the children tucked into the traditional Spanish bread Pan Basico, when the Denmark team took to the field it was Jødekager, (Danish Cookies), for Italy, Roasted Vegetable Lasagne with Pruna e Mela Torta (apple and plum cake) to finish, while England’s contribution to school lunches was Bangers, Mash and Peas with Stoneground Wholemeal Cottage Loaf.

Adrian, who believes what’s going on around the world needs to be celebrated, is a keen football fan and was disappointed there was no happy ending. He said:

“I was gutted like everybody else. England lost their way in the second half, and that was a shame.”