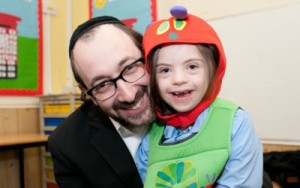 Ashley took on the task despite claiming that he “hates Purim”.

“It’s the one day of the year that everyone thinks they’re a comedian. Leave being funny to the professionals! We don’t have a day when everyone decides to service their own car. However, I am prepared to make an exception for those who are raising money for Kisharon. Just this once.”

Fundraising Director Richard Franklin has spoken to almost 1,000 students at schools across London in the run up to Purim to encourage them to raise money for Kisharon.

Early indications are that it’s set to be a bumper year with more than 500 people shaking their buckets for Kisharon on Sunday. Last year, Kisharon raised £20,000, and hopes are high that the figure will be matched or exceeded.