The discovery of a Kisharon collecting box in Berlin shows that a little kindness goes a long way.

James Alexander, on a short break in Germany, spotted the box on display in the Berlin Jewish Museum. He snapped a photo for his mum, Kisharon Volunteer Coordinator, Andrea Alexander. 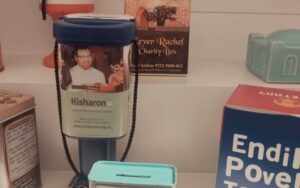 Berlin curator Michal Friedlander explained that the museum had a display of tzedakah boxes from around the world, old and contemporary, and when the collection was assembled the museum had a UK intern working with their team whose family had been supported by Kisharon.

“His family were active advocates of your organisation,” Michal said. He particularly wanted a Kisharon collecting box and so sourced one from the UK especially.

James was in Berlin with a friend who was running the Berlin Half Marathon.