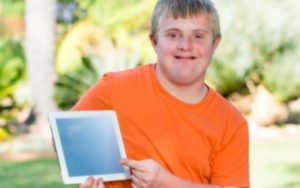 More than 70 per cent of people with the condition are overweight or obese, and less than 20 per cent hit the Government’s targets for physical activity.

The app, developed by the Down’s Syndrome Association, and funded by the Department of Culture, Media and Sport was tested at all stages in its development by people with the condition. Users are rewarded with badges and points for planning, shopping, cooking and eating healthy meals and the app tracks increased physical activity which is rewarded too.

The app can be downloaded for free on Apple and Android smartphones and tablets, and from Apple and Google Play stores.