The Mayor of Barnet’s Charity Appeal Committee held a reception at Westminster on Wednesday evening. A tour of Parliament by Mike Freer MP, which was due to take place, was called off at short notice due to the no-deal Brexit vote taking place that evening. 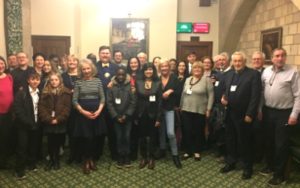 Instead guests had a bird’s-eye view of the proceedings in the House of Commons from the public viewing gallery.

Adele Busse, Acting Director of Fundraising and Communications, one of the organisers of the event, said: “It was fascinating to watch the debates taking place and there was a great atmosphere in and around Westminster.”

A bottle of port, signed by Prime Minister Theresa May, sold for £105 in a silent auction. Proceeds from the event will be split between the Mayor of Barnet’s charities: Kisharon and Live Unlimited.